Bass Machine was in essence an attempt to revisit a commonly used trick of the trade whereby the warm roundness, power and motion of the Minimoog’s bottom end was blended with the bite and clinical accuracy of FM bass.  The result is a nice example of where the whole is greater than sum of its parts…

In order to capture as much of the Model D’s character as possible, four patches were dialled into the instrument complete with filter envelope.  Since such a process would probably have rendered rather inflexible results another four patches were captured with the filter wide open.  Every white key was captured as four random round robins resulting in over 800 samples from Hideaway Studio’s beloved 1976 Minimoog No.7751.

Eight patches were then dialled up on a classic 4-OP FM synth.  Four sounds were lightly tweaked and four were programmed to offer a wide range of sonic palette that suitably complemented the patches from the Model D.  Over 280 samples were captured from the instrument on every white key.

At the heart of the Bass Machine is a superb dual voice synth engine which was implemented by Stephen Howell (Hollow Sun) and scripting guru Mario Krušelj thus permitting samples from each instrument to be layered complete with independent filters, envelopes and LFO’s for each channel.

Over 50 example patches were programmed during the course of the project and are bundled with the download.

A quick walkthrough of some of the example patches below..

“A wonderfully crafted musical instrument. I was able to step sequence some crazy DAF – style basslines that were as enigmatic and unstable as the real machines I was using three decades ago. Also covered are Sub Sine creations that add weight and character to the bottom end in an extremely subtle way. It’s a full – on bass synth studio for Kontakt that i will use a lot i am sure.”

“The Bass Machine has an awesome analogue sound to it! Loving what you can do with a bit of tweaking. Congrats on a great product.” 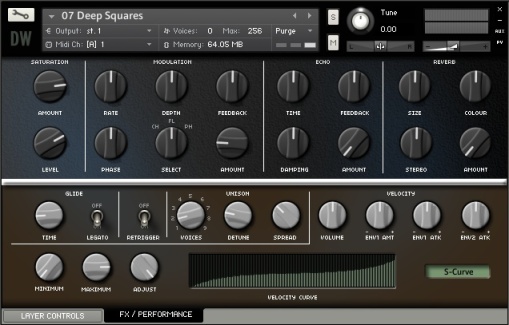 As well as a useful array of effects including saturation, Bass Machine features a number of functions well suited for bass timbres.  The unison control permits several voices to be stacked with variable detune and spread.  Similarly the glide function with legato and retrigger switches is ideal for recreating various performance styles.

Bass Machine also features an extensive velocity mapping and routing function.  The user may setup velocity map based on exponential, linear, logarithmic or S-curve laws. The remapped output is then routed in varying degrees to overall volume, filter amount, filter attack phase and VCA attack phase.  In conjunction with the significant degree of movement already present in the Moog’s triple free running oscillators and the round robins, the performance functions really help to breath life into live performances and programmed sequences.

Several of the demo patches also make use of the mod wheel via the LFO mapping function to bring in various vibrato and filter effects.

**There is one mystery sample included.   It holds a secret…   the lucky one is the first to break the secret by sending me a screenshot of their discovery and they shall be rewarded…