The 1970s were to be a magical time when a string of groundbreaking technology was conceived and developed at Bell Labs (BTL), Murray Hill, New Jersey. Many of the developments at Bell Labs have been pivotal and have subsequently played an extremely important part in shaping modern life. This includes the famous UNIX operating system (the grandfather of Linux and all its derivatives), the C Programming Language, fundamental parts of the technology that form the internet, digital telephony, satellite communications and audio/video compression techniques to name but a few.

During this time a very talented research scientist called Hal Alles was working on means to implement echo-cancellation in digital telephone systems. This led to the development of an advanced high speed digital oscillator system. On experimenting with the concept it became apparent that it might have some merit as the basis of an advanced music synthesizer using real time digital control techniques. Incredibly, Hal was permitted to setup a side project with funding to explore this notion and after very much toil and expense the Bell Labs Synthesizer or Alles Machine was born. This 300lb behemoth was nicknamed The Blue Monster or Alice for short.

At the heart of the Alles Machine was Hal’s high speed digital oscillator technology implementing 64 digital oscillators. The instrument was hosted by a DEC PDP-11 minicomputer (the same range of computers UNIX was developed on at Bell) and literally programmed in C to perform whatever task the operator wished to undertake. Needless to say without any form of dedicated controls, synth engine or patch programming interface very few musicians indeed were able to realise the true potential of Alles Machine!

Two musicians that were gifted with the necessary combination of skills to handle The Blue Monster were Laurie Spiegel and Roger Powell. Very sadly almost no recorded material has survived but the few recordings that have reveal a machine capable of generating huge evolving digital soundscapes – this is particularly apparent in Laurie’s Improvisation on a Concerto Generator from 1977.

Towards the late 1970s a number of synthesizer manufacturers became aware of the instrument including the MTI division of Crumar who saw the new technology as a means to leap ahead of the pack. A talented development team was assembled and it was agreed that Bell’s Hal Alles and Max Mathews were to offer technical advice on the best means of essentially commercialising the Alles Machine whilst making it much more accessible to every day musicians. The first instrument to be developed was the GDS (General Development System). Although the instrument was hardly inexpensive (it cost around $30,000 in 1979) an ambitious cost down exercise was undertaken to reduce the 1400 or so integrated circuits to only a few hundred. Amazingly, the design team was able to meet the stringent material cost target and the GDS was born.

Only 10 or so GDS systems were ever built but it became the sound development tool for its derivatives, the Synergy, Synergy II+ and Mulogix Slave 32. The GDS had a small number of influential owners who were able to work wonders with the new technology. This included Wendy Carlos and Klaus Schulze who released a number of albums and film scores in the very early 1980s heavily drawing on the GDS as a source of digital textures, pseudo realistic timbres and percussion. 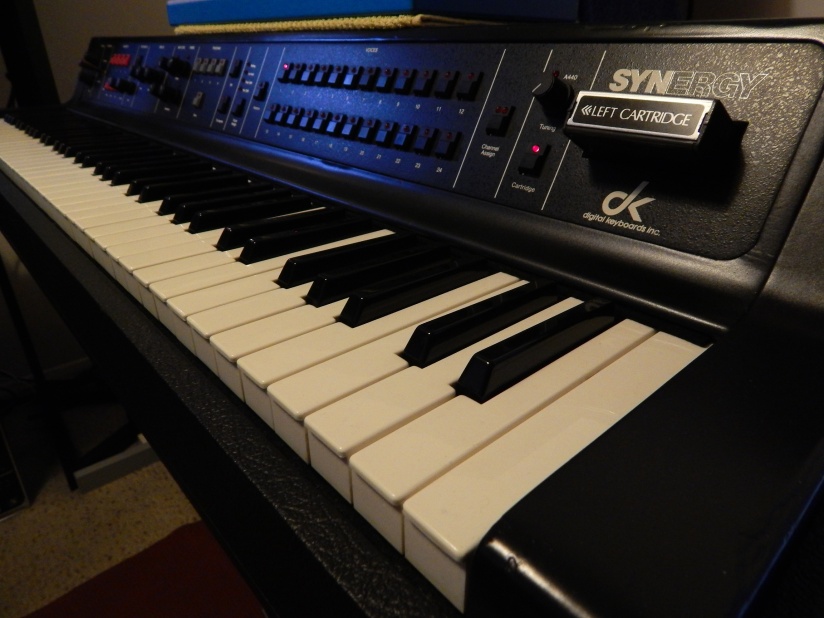 Following the GDS was the Synergy (DK-1) which relied on the identical 32 high speed oscillator subsystem but coupled to a dedicated Z80 controller thus enabling the instrument to operate stand alone relying on voice cards plugged into the front panel to permit the user to select between or layer up to 4 combinations of 32 patches. A few years later a clever upgrade was offered to basically return the programming ability of the GDS to the Synergy through the use of an external host computer manipulating a special memory area known as VRAM. This variant was known as the Synergy II+ but was not sold in great numbers thanks in part to the release of the considerably more affordable DX7.

All variants were more than simply large banks of digital sine wave generators as found in more traditional additive synthesizers. They were unusual in that the oscillators could produce both sine and distorted triangular waveforms which could be combined in a very flexible manner ranging from straight additive synthesis, phase modulation or combinations of both. This meant that far more harmonically complex sounds could be generated without having to resort to a massive array of sine oscillators. Not only was the oscillator topology complex but the modulation abilities were truly groundbreaking. Each oscillator had its own envelope and a whole raft of real time modulation could be applied to each control parameter including the notion of switching between low and high velocity parameter sets.

Risen from Near Obscurity – Reviving Synergy #01205

Time has not been kind to the Synergy with many examples having perished years ago. Needless to say that very few have experienced a working Synergy let alone a full II+ system first hand in recent times.

Quite by chance earlier in the year I stumbled across a now very rare 1983 Synergy II+ in a rather burnt out state with a very interesting past. After a few days of intense research I was able return this poor beast to working order and I set about the soon to be arduous task of finding a suitable Kaypro II computer to be coupled to it to run the infamous synHCS host control application. The task of tracking down a working Kaypro was tricky enough in the UK but the task of running an OS, finding working application software, making a suitable serial cable to connect the two machines, configuring the link and locating the factory patches in the correct format proved to be a major headache.

Into the 21st Century…

As has been such an effective retrofit on other vintage instruments such as the Emulator II, with the invaluable help of its inventor, Jean-François DEL NERO, I successfully managed to install a superb HxC floppy disk emulation system in place of one of the 5.25” disk drives and embarked on the ludicrously tedious task of manually converting the disk images of the entire GDS/Synergy Factory Sound Library to virtual disks. This permitted me to audition several hundred patches in awe of this groundbreaking digital wonder…

I decided to capture a broad selection some of the more impressive sounds. This turned out to be a bigger task that I had envisaged and after many tens of hours of run time the beast died in front of my eyes and after several hours of mild panic I determined that the very elderly and rather grizzly switch mode power supply had failed. To my great relief the beast was returned to operation the following day having retrofitted a modern high efficiency equivalent in its place (which was half the size of the original!).  During my time sampling the Synergy a curious feeling crept over me that I have very rarely experienced whilst sat in front of a vintage instrument – that of sheer wonder that a team of engineers had the vision and bravery to develop an instrument so very ahead of its time and so different from those of the day. In fact, despite the number of wonderful vintage synths I get work on these days, the last time I felt this way was when I was returning the infamous 1938 Novachord #346 to life.

In short, I hope you enjoy playing the sampled instruments as much as I’ve enjoyed making this library…

The GDS/Synergy II+ is surprisingly capable of synthesizing all manner of percussive sounds including many of a similar but not identical nature to their analog counterparts from drum machines of yesteryear.

As well as the main body of instruments Synergenesis features over 220 percussive samples capturing a significant proportion of the drum patches featured in the original factory instrument library which dates back to the early 1980s. They have been presented as two main drum kits and as a series of sets primarily intended to permit the user to preview them and experiment with filtering and dynamics on select sounds. Multiple instruments can then be used in this manner over a number of midi channels if required. More technically minded users can remap the drum sets as they wish in Kontakt.

The drum sounds in this library are also presented in .wav format.

As well as the original 24-bit samples the percussion is also presented in 16 and 8-bit formats (all at 44.1KHz sample rate) in their respective folders for use on a wide range of software based sample players and applications as well as a number of hardware samplers such as the MPC series.

This library requires the full version of Kontakt 4.2.4 or higher.
Approximately 1GB of free hard disk space is required.