Panoramic Tones was the first opportunity to try out a new (old!) piece of kit I’ve been working on – a 1960’s Baldwin all tube “Panoramic Stereo Tone Converter“.  The PTC  is an extremely unusual spring reverb in that the audio is passed over the spring as a 20KHz ultrasonic AM modulated carrier using piezo ceramic transducers.  As a result it is much more complex than the usual offerings and has a considerably more tortuous signal path.  Having built a high voltage power supply to drive the chassis I modified the spring tank itself to add a transmit transducer in the middle of the spring with receivers at the ends to impart a pseudo stereo effect.  This very clever and almost forgotten technology has a number of advantages… firstly the spring is almost totally immune to vibration and it’s quite unnerving how the occasional accidental knock doesn’t result in the usual cacophony of clangs.   Secondly the frequency response appears to be flatter and the results somehow more musical.   I have had other success with this unit but that’s for later… 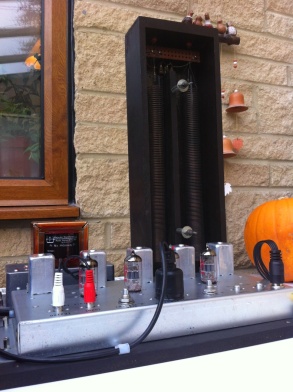 Panoramic Tones was made by feeding patches I dialled up in the SE Omega 8 and Supernova blended and fed hot via a tube EQ into the ultrasonic reverb.