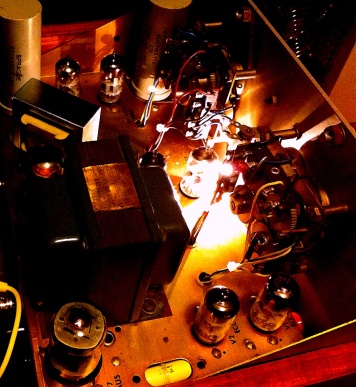 Electron Clouds is the latest addition to The Blue Zone.   It was made by feeding an xmod’d dual oscillator source from Minimoog 7751 into a gorgeous 1966 Krohn-Hite model 310-C all tube Band Pass Filter which I recently fixed up.   An external regen path was connected to the tube BPF using a tube preamp to impart strong resonance to the point of near self oscillation.  The result was remarkably effective and the cutoffs were controlled to gently sweep the harmonic resonance points.  Several loops were setup and presented as random round robins.

This download features 4 example patches and 1 multi.   The basic sound is presented as keys, a pad and an arpeggio.  As usual, all of the patches are quite sensitive to velocity. 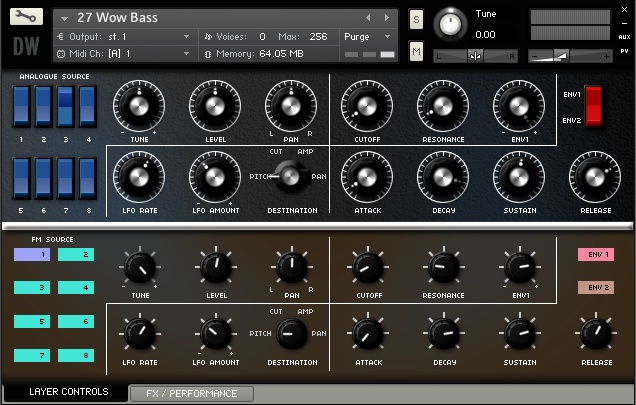 Bass Machine was in essence an attempt to revisit a commonly used trick of the trade whereby the warm roundness, power and motion of the Minimoog’s bottom end was blended with the bite and clinical accuracy of FM bass.  The result is a nice example of where the whole is greater than sum of its parts…

In order to capture as much of the Model D’s character as possible, four patches were dialled into the instrument complete with filter envelope.  Since such a process would probably have rendered rather inflexible results another four patches were captured with the filter wide open.  Every white key was captured as four random round robins resulting in over 800 samples from Hideaway Studio’s beloved 1976 Minimoog No.7751.

Eight patches were then dialled up on a classic 4-OP FM synth.  Four sounds were lightly tweaked and four were programmed to offer a wide range of sonic palette that suitably complemented the patches from the Model D.  Over 280 samples were captured from the instrument on every white key.

At the heart of the Bass Machine is a superb dual voice synth engine which was implemented by Stephen Howell (Hollow Sun) and scripting guru Mario Krušelj thus permitting samples from each instrument to be layered complete with independent filters, envelopes and LFO’s for each channel.

Over 50 example patches were programmed during the course of the project and are bundled with the download.

A quick walkthrough of some of the example patches below..

“A wonderfully crafted musical instrument. I was able to step sequence some crazy DAF – style basslines that were as enigmatic and unstable as the real machines I was using three decades ago. Also covered are Sub Sine creations that add weight and character to the bottom end in an extremely subtle way. It’s a full – on bass synth studio for Kontakt that i will use a lot i am sure.”

“The Bass Machine has an awesome analogue sound to it! Loving what you can do with a bit of tweaking. Congrats on a great product.”

As well as a useful array of effects including saturation, Bass Machine features a number of functions well suited for bass timbres.  The unison control permits several voices to be stacked with variable detune and spread.  Similarly the glide function with legato and retrigger switches is ideal for recreating various performance styles.

Bass Machine also features an extensive velocity mapping and routing function.  The user may setup velocity map based on exponential, linear, logarithmic or S-curve laws. The remapped output is then routed in varying degrees to overall volume, filter amount, filter attack phase and VCA attack phase.  In conjunction with the significant degree of movement already present in the Moog’s triple free running oscillators and the round robins, the performance functions really help to breath life into live performances and programmed sequences.

Several of the demo patches also make use of the mod wheel via the LFO mapping function to bring in various vibrato and filter effects.

**There is one mystery sample included.   It holds a secret…   the lucky one is the first to break the secret by sending me a screenshot of their discovery and they shall be rewarded…

Quantum Entropy is the latest addition to The Blue Zone Series for Kontakt 4.2.4 and above.   It consists of a three layer multi presented as separate instruments which can be layered with any of the other sounds in the series.  In this release the raw material for all three sounds was from rather unusual methods…

Octave Flipper was  made by recording the vertical signal output of a 1968 Tektronix 545B tube oscilloscope with the timebase pushed into instability between single and double cycles on the screen whilst triggered by a cyclic input signal and chopped (multiplexed) with the timebase sawtooth waveform!  This caused a harmonically rich octave flipping effect.

Grand Nebula was made by pushing a high frequency LFO modulated sustain on the Monotron into infinite delayed feedback with the filter cutoff set low and feeding the results through the Watkins Copicat tape delay.

Neptune Brass is a warm brass like pad made by gently feeding multiple raw oscillators into a tube overdrive and then into an analog chorus.  Its also presented in arpeggiated form.

Chopped Chymes is this weeks addition to The Blue Zone Series.  It comes in the form of three instruments… Cosseted Organix is a warm dual layer of a phased organ patch I recently programmed on the Omega 8.  This was washed through a stereo analog chorus and tube EQ and one layer tape processed on the Copicat.   Woodstock Chymes consists of several acoustic recordings of a Woodstock wind chime being struck and the results fired off, round robin, via the arpeggiator.   Phased LFO chopper is a feedback effect passed through a Small Stone Phaser and several random round robin starting points fired off by the arpeggiator throughout the natural phaser cycle.  All three work together quite nicely in any number of combinations…

It seemed right making this a red one….

Oil Can Overdrive is the latest addition to The Blue Zone Series.  It was made by feeding an X’mod patch from Minimoog 7751 hot into my recently fixed up 1960’s Echo-Reverb Electrostatic “Oil Can” tube delay along with a hand cranked tube generated sine wave to create a feedback effect and the result fed into a Watkins Copicat tape delay. There is a hell of a lot of tube/analog generated magic going on here!!.. 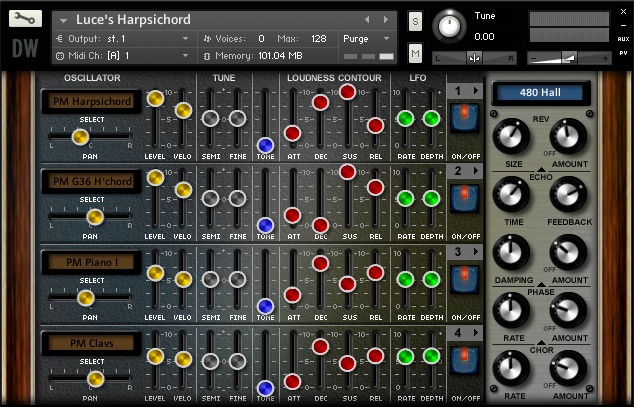 Constellation: Apollo 203A was in many ways a celebration of yet another successful resurrection of an old classic saved from the grave… This time it was a 1976 Polymoog model 203A most definitely rescued from a fate worse than death!…  she could have become a coffee table! Well ok, maybe not…

In a similar manner to Monopolyphonix I really didn’t want to sample the poor beast to death simply to produce another virtual offering so instead I captured over 500 samples directly from No.3211’s mix output, often a sample per key, and set about trying to make something a little different.   To add to the mixing pot I sampled a number of patches I’d recently created on my SE Omega 8 which I thought was kind of fitting in a way as it almost felt like a celebration of the last 30+ years of polyphonic synthesis.   In order to make the two sing a little more sweetly together I decided to wash the Omega through an old analog stereo chorus unit and a tube equaliser. 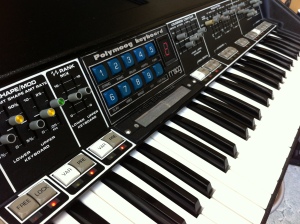 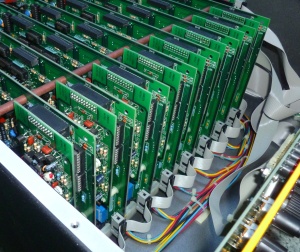 PM3211 AirVox is a celebration of the return of yet another old gem to the living world.  This time it was 1976 Polymoog #3211 recently acquired by the musical genius that is Will Gregory of Goldfrapp.   Rescued from the US as a very dead but promising example I set about an intense couple of weeks breathing life back into her.   Some 45 CMOS chips, 37 LEDs and a retrofitted switched mode PSU later along with a deep cleanse resulted in sound – glorious sound!.. 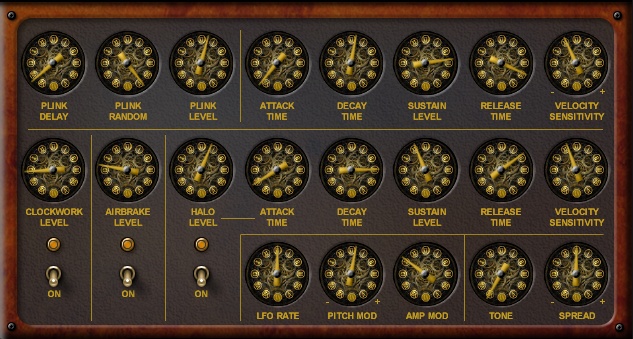 The project started off by acoustically recording 21 tine actuations from a disassembled music box mechanism placed on a wooden sounding board using both conventional condenser and contact microphones. The sound of the clockwork motor and air brake mechanisms was also captured. A synthesized halo effect was created to blend with the tines by capturing several beating sine waves from a 1960’s tube based dual tone generator which were fed through the filter stages of a Minimoog with the filter in near resonance.

A second page was developed to permit the user to dial in various effects such as chorus, phaser, delay and reverb…

Tubed Electrostatic Sustain is my first to be created using a wonderful 1966 Fender Echo-Reverb tube electrostatic “oil can” delay which I recently fixed up.   This bizarre old technology creates a delay by writing an audio signal in the form of a continuously varying electrostatic charge onto a rotating metal disk (like a photocopier) which sits in a bath of dielectric oil – hence the name “oil can delay”.   The technology was developed by Tel-Ray and is just about as analog as it ever gets with its overdriven tube preamp and wonky belt driven disk.

The instrument was created by overdriving the tube stages with several cycling PWM waves from a CS01 synth.

Triple Phased Halo is the latest addition to The Blue Zone Series for Kontakt 4.2.4 and above. It was made with two tube generated bell ratios each created by feeding mixed dual sine waves from a 1960’s tube infested Panoramic Two Tone Generator fed hot into the Minimoog’s external input with the filter running in self oscillation at a fixed ratio.  The results were passed into the Triple Tube Hybrid Phaser and a number of loops created in Kontakt…